Home/BLOG/Muslin- A Fine Textile from Bengal

Muslin- A Fine Textile from Bengal

Weaving a fabric is a skill where a weaver imagines his livelihood in terms of the lines and cross-section of the thread, with every weave a silent promise of beauty is given, with every fabric a nervousness of grace is taken. Weavers are the artists of days gone by where handwork was used to achieve the desired intricacy and finesse. The hand-woven refined art was much appreciated in the centuries gone by, giving much-needed importance to the artists.

India can undoubtedly be considered as a land of astonishing talent and variety, with its different landscapes and ecosystems over the vast land of the country, people imagine their surroundings very differently. From beautiful southern silk to regional varieties of textiles, along with indigenous thread work to different printing techniques, for a masterpiece to develop local resources as well as the local need is very important. Considering rituals are made based upon the local imaginings, local crafts like textiles are also made of shared belonging to a community towards a specific resource upon its availability and convenience.

Muslin can be considered as the most beautiful fabric for its fineness so delicate that it looks transparent even after sheets and sheets of it upon the body. It’s a gorgeous fabric originated in Dhaka city, which is now in Bangladesh, as a local skill with locally produced cotton and attained worldwide fame as the Dhaka Muslin. The textile industry of Bengal is very old. Bengal cotton fabrics were exported to the Roman and the Chinese empires and they are mentioned in Ptolemy’s Geography and the Periplus of the Erythraean Sea and by the ancient Chinese travelers.

A fabric of a plain cotton weave but so fine that it became one of the most demanded cloth material for the royal houses like Mughals where it was widely known as ‘mulmul-i-khas’.A huge amount of finest Muslin was procured for the use of Mughal emperors, provincial governors and high officials and nobles. The various muslins had poetic names like ab-i-rawan, meaning “running water”, and daft hawa, meaning “woven air”. Each garment weighed as little as an ounce and would wear out after a single use.

Dhaka muslin was very famous across the markets and was in great demand in international markets. Mostly foreign trade was with the countries like Arabia, Iran, Armenia, China, Malaya, and Java. Muslin fabric in the recent times used in dressmaking and sewing, medicine, Shellac polishing and culinary. It can be considered a fabric so airy and light that even now, muslin’s beauty is immensely popular. 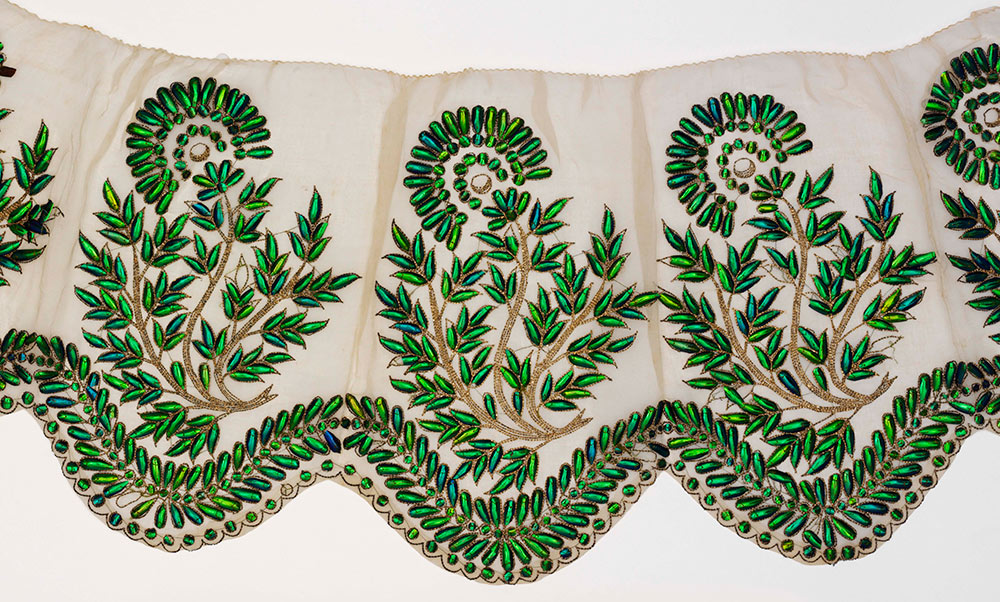 The decline of Dhaka muslin was because of the loss of patronage from the Mughal emperor, nawabs and high officials. Subsequently, with the coming of Industrial revolution in England, modern mill made cloth took its place with its cheaper price and marketability.

Though after Partition, the lineage from Bangladeshis least chanced upon, but as a united country India before partition, muslin traced its journey from the Bengal hinterlands to the inland roadways to the Mughal India. Muslin is considered as a traditional craft of India as it is running its course from hundreds of years in the history of royal houses, in the paintings, in the books, written the lifecycle of this fabric in the golden letters.

About the Author: Bhumika Kathuriya